Headliners Junkyard Empire and Pocket of Resistance have shared the stage with the likes of Boots Riley and the Coup, Eyedea, Ill Chemistry, the New Congress, and Los Nativos.

During the RNC in St. Paul, Junkyard Empire played the Sept 4th “No Peace For the Warmakers” show at the State Capitol, and Pocket of Resistance played the the Block Party in Lowertown.

Joining these two bands are a host of local musicians—including Roger Culbertson and Jo Schubert, Bill McGrath, and Bill Habedank who would like to introduce a new peace song around the campfire—to take us through the day into the wee hours! See the Pigstock 2009 Schedule for more details. 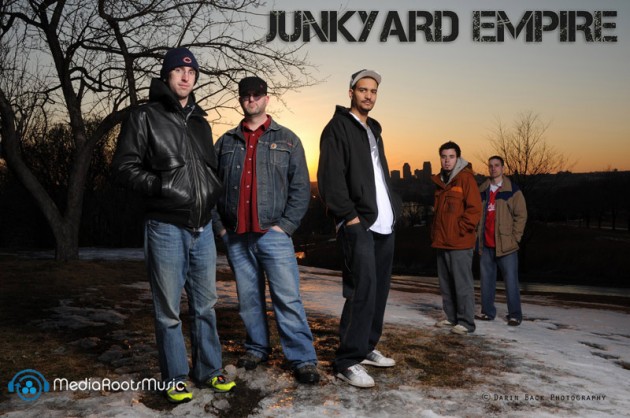 Since the debut of Reclaim Freedom in late 2007, there has been a steadily growing buzz building around Junkyard Empire, no doubt helped by their now historic performance at the Minnesota State Capital during the last day of the RNC protests in Saint Paul. Their music is laced with deep, hypnotic grooves that flow effortlessly under the profound and politically dissident lyrics of rapper Brihanu. Junkyard Empire has played with Rhymesayers artist Eyedea, LA Music Award winners the New Congress, Australian urban roots crew Blue King Brown, and they turn heads everywhere they play.

In October of 2008 Junkyard Empire released their self-produced EP Rise of the Wretched, which has garnered only great reviews, and landed them on URB Magazine’s NEXT 1000 list. The talented players that make up Junkyard Empire bring a wide range of musical influences to the stage and into the studio. JYE will be releasing their debut EP Rebellion Politik on the newly minted indie label Media Roots Music this Summer.

“A jazz version of Rage Against the Machine, Minnesota-based Junkyard Empire blends jazz instrumentals, hip hop, and socially conscious lyrics to create a fresh sound. Composed of a group of talented musicians, artists, writers, and activists, this new Midwestern band has something to say.” — Political Affairs Magazine

“Politically charged…Musically relevent. Junkyard Empire insists upon delivering equal amounts of both Hip-Hop & Jazz executed by a 5 piece band. The messages they represent are strong: take control of your own destiny and question what the government tells you; make moving music and have fun doing it! Stamped by an original, dope group name & showing loads of potential both live & recorded, do not miss an opportunity to observe these cats.”

Visit Junkyard Empire on MySpace, listen to or download an MP3 of their title track from their coming album, Rebellion Politik. 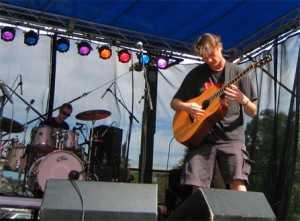 The new band of Scottish singer-songwriter Nigel Parry, who has lived in the Twin Cities for a decade.

Although it’s not unusual for singer-songwriters to travel around the world, Nigel Parry has lived in some pretty strange and scattered parts of the world. Nigel lived from 1994 to 1998 in the Palestinian West Bank, and the intensity and beauty of the music that these places have squeezed out of this unsigned musician is rare.

Haunting tunes, multi-layered lyrics, and boiling emotion are just part of this Scottish singer-songwriter’s presentation. Based in the United States, Nigel released his debut “This Side Of Paradise” album in February 2001.

“…a disc whose recommendation is its deftly managed intensity” — New Internationalist magazine, August 2001

Visit Pocket of Resistance’s website, listen to, or download an MP3 of the song they debuted at their 2008 RNC performance, Peacemakers.