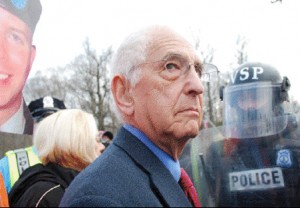 The photograph (right) of Daniel Ellsberg depicts exactly the courage shown by this man for the great majority of his life. Ellsberg is again standing up to injustice here at the Marine facility in Quantico, VA where Bradley Manning was being held and tortured for allegedly divulging state secrets to Wikileaks. Ellsberg was later arrested along with 35 others on March 21, 2011.

Daniel Ellsberg was born in Chicago in 1931 but grew up in Detroit where he attended Cranbrook School. He nearly became a concert pianist at the persistent encouragement of his mother until in 1946 when his mother and brother tragically died in an auto accident in which Daniel was also a passenger.

In 1954 Ellsberg joined the U.S. Maine Corps being the first in a class of 1,100 lieutenants at the Quantico, Virginia facility. He became a platoon leader and company commander In the Marine 2nd Infantry Division. After two years he was discharged as a first lieutenant in 1957. He attended Harvard graduate school for another two years and then went to work at RAND where he examined nuclear strategy and where he created the Ellsberg paradox.

In August 1964, Ellsberg started work in the Pentagon under Defense Secretary Robert McNamara before working in Viet Nam for two years under General Edward Lansdale as a civilian in the State Department. After that, he moved back with RAND. In 1967 he worked with top secret documents about the conduct of the Viet Nam War as commissioned by Secretary McNamara creating documents which would be later known as the Pentagon Papers.

By 1969, Ellsberg became bothered by what he knew about the lies and misrepresentations and omissions presented to the American people and he began participating in anti-war marches. Ellsberg was most definitely altered by the war resister Randy Kehler, who was prepared to go to prison for his beliefs. This courage and conviction shown by Kehler moved Ellsberg to the point where he knew he must act to divulge state secrets which were prolonging the Viet Nam War. The rest is history as after the Pentagon Papers were released, Ellsberg had to go into a period of hiding to avoid being arrested. Ellsberg escaped what may have been an assassination attempt called by G. Gordon Liddy and the “plummers”.

Ellsberg surrendered along with fellow RAND colleague, Anthony Russo, on June 28, 1971 to the U.S. Attorney’s Office. They were tried under the Espionage Act of 1917. The trial ended in a mistrial and the case was dismissed on May 11, 1973.

Since that time, Ellsberg has continued political activism by attending protests, lecturing, writing and speaking on current events, especially in the lead up to the Iraq War in 2003. His story has most recently been depicted in a movie entitled The Most Dangerous Man in America: Daniel Ellsberg and the Pentagon Papers (2009). He has encouraged others in high places to divulge information which exposes the government’s use of untruths that lead to public acceptance of war.

Ellsberg has been the recipient of numerous awards including: Inaugural Ron Ridenhour Courage Prize, the 1978 Gandhi Peace Award and the Right Livelihood Award in 2006. The Right Livelihood Award has been called the “Alternative Nobel Prize” and Democracy Now calls this prize “widely recognized as the world’s premier award for personal courage and social transformation”.

Ellsberg participated in the December 2010 Veterans for Peace action in front of the White House and was arrested along with 130 others. He continues his activism as described earlier and continues it now by participating in our Veterans for Peace, Chapter 115 event, now known as Peacestock. It is a great honor to have Daniel Ellsberg’s participation at this 9th annual event. For more information go to: http://en.wikipedia.org/wiki/Daniel_Ellsberg 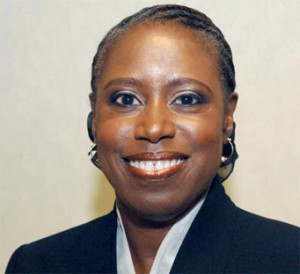 Cynthia McKinney, native to Atlanta, Georgia, was elected to five terms as a U. S. Representative to Congress in Georgia from 1992 to 2002 and a sixth term in Congress from 2004 to 2006. She was defeated primarily because of her opposition to the Bush Administration and the Iraq War. She supported not only anti-war legislation but also articles of impeachment of President Bush, Vice President Dick Cheney, and Secretary Condoleezza Rice.

Cynthia left the Democratic Party in September 2007 and after being recruited by the Green Party in 2000 and 2004. She eventually decided to accept the Green Party nomination as a Presidential candidate for the 2008 election.

McKinney earned her B.A. In international relations at the University of Southern California and an M.A. In Law and Diplomacy from the Fletcher School of Law and Diplomacy. She went on to teach in high school and later as a university professor.

McKinney’s political career began in 1986 where she tried to get elected to the Georgia House of Representatives, getting 40 per cent of the votes. She won election to the same seat two years later to join her father as the first father-daughter team to serve in the Georgia state house simultaneously.

While in the U.S. Congress in October 2001, she introduced legislation calling for the “suspension of the use, sale, development, production, testing and export of depleted uranium munitions pending the outcome of certain studies of the health effects of such munitions”. The bill was co-sponsored by five other representatives.

McKinney, is also well known nationally for being suspicious of the 2001 U.S. attacks by saying that the Bush Administration had advance knowledge of the attacks. She also recommended a serious investigation into U.S. policy in the Middle East. Her protests of Israeli treatment of the Palestinians caused trouble for her with AIPAC which led to her primary defeat in 2002 as the forces opposing her were too great to overcome.

In September of 2004 she joined The Citizen’s Commission on 9-11 as a commissioner and later signed the onto the 9/11 Truth Movement calling for renewed investigations.

In September 2008, she agreed to make parts of her campaign, an early end to the Iraq War and an end to threats against Iran and Russia; safeguarding of privacy and civil liberties, and repealing of the Patriot Act, repealing the Military Commissions Act and FISA legislation; no increase in the national debt; and a thorough investigation of the Federal Reserve System.

McKinney continues her activism in many ways and continues to be aware of the plight of the Palestinians. She participated in two humanitarian relief efforts for the Gazans in 2008 and 2009. Both times her ships were intercepted by Israeli ships and the first one was struck by the Israeli vessel. Both times the humanitarian effects by her and others were thwarted. The second time McKinney was deported from Israel.

We are so glad to have Cynthia McKinney come to Pigstock and tell us of her recent actions and maybe some ideas as to what we can do to change U. S. foreign policy. 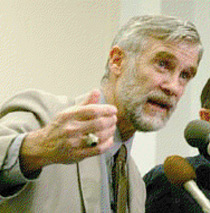 Peacestock is excited to announce the return of Ray McGovern as our speaker. Ray McGovern has spoken at two previous Pigstocks (former name of the event) and for the first time he will be speaking there in person.

McGovern went on to an illustrious career in the CIA starting in the 1960’s where his first role was the study of Soviet policy regarding Viet Nam. He gave intelligence briefs to President Reagan from 1981 to 1985, but also advised Vice-President George H. W. Bush, the National Security Adviser, the Joint Chiefs of Staff and the Cabinet. McGovern later was one of President George H.W. Bush’s analysts who prepared the President’s Daily Brief.

Upon his retirement, McGovern received the Intelligence Commendation Medal from President Bush only to relinquish it later in protest. He then worked for Washington D.C. area non-profits before joining the Servant Leadership School as co-director. He currently works with Tell the Word, which is the publishing segment of the Church of the Savior in Washington, D.C.

McGovern is now widely known as a critic of President George W. Bush’s misuse of intelligence in the lead-up to the Iraq War. He has also been very critical of the former Defense Secretary Rumsfeld and in May of 2006 confronted Rumsfeld directly.

In 2003 McGovern and other former CIA employees founded the Veteran Intelligence Professional for Sanity (VIPS). The group has been instrumental in describing the intelligence failures in the lead up to the Iraq War. In this capacity, McGovern has spoken to many groups, including those who attended past Peacestocks. He also participated in the protest marches at the 2008 RNC in St. Paul, MN.

In more recent actions, McGovern was arrested at the White House during a snowstorm along with 130 fellow Veterans for Peace and other peace activists in December 2010. On February 16, 2011 at George Washington University where the Secretary of State, Hillary Clinton, was giving a speech, McGovern turned his back to the Secretary which lead to his arrest and he incurred physical injuries in the process.

Besides this exciting and courageous career, Ray McGovern has remained devoted to his wife, Rita, for 42 years raising 5 children who have given them six grandchildren.

Peacestock is most honored to have Ray McGovern take time from his busy political, writing and family life to come to Wisconsin to speak with us and be in fellowship with us.

For more information go to : http://en.wikipedia.org/wiki/Ray_McGovern