Call to all muscians coming to Peacestock 2012

Please feel free to bring your instruments along and do some jamming with other muscians in the evening around a campfire.

Bill McGrath from Bonnie & the Clydes 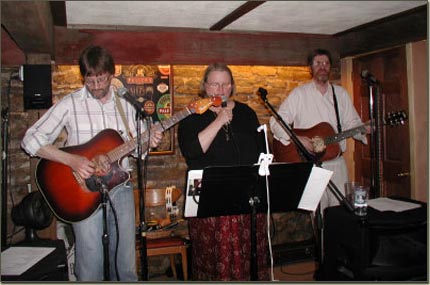 Music performed by Bonnie & the Clydes can best be described as the kind of songs you listened to when you and friends were renting your first apartment near the campus sometime in the sixties or early seventies and your entire furniture contribution to the apartment consisted of a mattress and a coffee table made from a telephone company wooden spool that you snatched from a construction site next to the natural food grocery that was up the rear stairway above the paraphernalia shop where they also sold posters and lava lamps and had a cat in the front window named Quagmire who was the mother of one of your girlfriend’s kittens that is now sleeping in your guitar case in the back of your VW microbus next to Ken Kesey’s book, a bottle of Boone’s Farm Apple Wine and a stack of signs protesting the government’s policies in some far-off country.

“We are String Beans, Chick Pea and Garbanzo. We are married, so that is why we have the same name. We sometimes make a little beans talk, but mostly we sing and play music, usually on mandolin and cittern. The music we play features a variety of types and styles that span hundreds of years, thousands of miles, and the vast being that has always bean. We sometimes make up songs about human beans that we meet. We don’t mind being has beans and like being full of beans, but even if you don’t care beans about beans, you might enjoy String Beans”. — By Roger & Jo Cuthberso