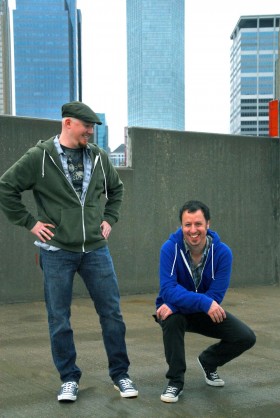 Adam Coolong and Geno Carlson from the Wild Colonial Bhoys will be playing 2014 Peacestock!

Twin Cities-based Celtic rock powerhouse Wild Colonial Bhoys have just celebrated their 10th anniversary as a band. Whether playing festivals and touring as their five-piece, guitar and fiddle-driven rock lineup or as the acoustic guitar duo that started their career, the Bhoys have successfully forged their own niche within the Irish/Celtic musical genre. To describe their sound, do as Paddyrock.com suggests and “take the Young Dubliners, The Elders, Carbon Leaf, Great Big Sea and put them in a blender… you’d have a Wild Colonial Bhoys smoothie!”

Ten years, five albums and thousands of miles have transformed the Bhoys from a local favorite to a Celtic rock tour-de-force. With their innate musicianship and inspired live performances it’s easy to see why Wild Colonial Bhoys have become one of the best Celtic rock bands in the Midwest.

Thomas R. Smith has had hundreds of poems published on three continents.  In the United States, his poems and essays have appeared in numerous journals and anthologies.  His poems were included in Editor’s Choice II (The Spirit That Moves Us Press), a selection of the best of the American small press, and in The Best American Poetry 1999 (Scribner).  His work has reached wide national audiences on Garrison Keillor’s public radio showWriter’s Almanac and former US Poet Laureate Ted Kooser’s syndicated newspaper column, American Life in Poetry.  He is author of six books of poems, Keeping the Star (New Rivers Press, 1988), Horse of Earth (Holy Cow! Press, 1994), The Dark Indigo Current (Holy Cow! Press, 2000), Winter Hours (Red Dragonfly Press, 2005), Waking Before Dawn (Red Dragonfly Press, 2007), andThe Foot of the Rainbow (Red Dragonfly Press, 2010).  A chapbook of nature poems,Kinnickinnic, appeared in 2008 from Parallel Press.  He has edited Walking Swiftly:  Writings and Images on the Occasion of Robert Bly’s 65th Birthday (Ally Press, 1992; HarperCollins, 1993) and What Happened When He Went to the Store for Bread (Nineties Press, 1993), a selection of the best of the Canadian poet Alden Nowlan, now in its second edition.      His poetry criticism has appeared in the St. Paul Pioneer Press, the Minneapolis Star Tribune, Great River Review, Ruminator Review, and other periodicals.  He is a Loft Foreword Program poetry instructor at the Loft Literary Center in Minneapolis.  He and his wife, the artist Krista Spieler, live in River Falls, Wisconsin.

In the 1970s and 1980s, Thomas R. Smith taught poetry in rural communities of western Wisconsin through the CETA-funded organization, Artspeople of Wisconsin, for which he also served as director.Since 2000 he has taught highly-regarded poetry classes at the Loft Literary Center in Minneapolis, most recently as an advisor to the Loft Foreword Program.He also leads poetry workshops at the annual Minnesota Men’s Conference founded by Robert Bly.In the fall of 2008, he gave his first poetry workshops in England, as well as lecturing at the Temenos Academy in London.  He delivered a talk at the University of Minnesota’s symposium on Robert Bly’s work in April, 2009.