Ann Wright served thirteen years in the U.S. Army and sixteen additional years in the Army Reserves, retiring as a Colonel. She is airborne-qualified.

In 1987, Ann joined the U.S. Foreign Service and served as U.S. Deputy Ambassador in Sierra Leone, Micronesia, Afghanistan, and Mongolia. She received the State Department’s Award for Heroism for her actions during the evacuation of 2,500 people from the civil war in Sierra Leone, at the time the largest evacuation since Saigon. She was on the first State Department team to go to Afghanistan and helped reopen the Embassy there in December 2001. Her other overseas assignments include Somalia, Kyrgyzstan, Grenada, Micronesia, and Nicaragua.

On March 19, 2003, the eve of the U.S. invasion of Iraq, Ann Wright cabled a letter of resignation to Secretary of State Colin Powell, stating that without the authorization of the UN Security Council, the invasion and occupation of a Muslim, Arab, oil-rich country would be a violation of international law. She was one of only three persons who resigned from the U.S. government in opposition to the Iraq war.

Since then, she has been writing and speaking out for peace. She fasted for a month, picketed at the US prison at Guantánamo, Cuba, served as a juror in Bush impeachment hearings, traveled to Iran as a citizen diplomat, and has been arrested numerous times for peaceful, nonviolent protest of Bush’s policies, particularly the war on Iraq. She has also been on delegations to Iran.
She has travelled to Gaza three times in 2009 following the Israeli attack on Gaza that killed 1,440 and wounded 5,000. She also visited Gaza in 2011 and 2012. She was an organizer for the 2009 Gaza Freedom March that brought 1,350 persons from 44 countries to Cairo, Egypt, in solidarity with the people of Gaza.

She has traveled to Afghanistan, Pakistan and Yemen to talk with families whose family members have been killed by US assassin drones. She has been arrested in New York and Nevada at US drone bases for protesting US killer drones.

She was a delegate on the 2015 Women Cross the DMZ which featured peace conferences in both North and South Korea. She has traveled to Jeju Island, South Korea three times in solidarity with opponents of a naval base being constructed to port ships carrying the US aegis missile offense system. She has been on two speaking tours in Japan in defense of the Article 9 anti-war part of the Japanese constitution. She has been a guest speaker on the Peace Boat in a trip through Northeast Asia.

In 2016, she was in South Korea, Okinawa, Russia, Poland on speaking missions. She met with a women’s delegation from North Korea in Indonesia as a part of Women Cross the DMZ. She was in Standing Rock, North Dakota three times in late 2016 in solidarity with native Americans in attempting to stop the Dakota Access Pipeline. 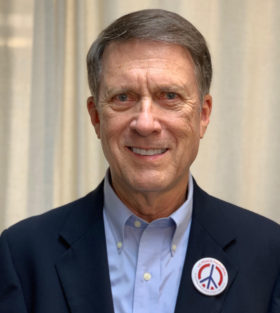 Michael D. Knox speaks on the topic, “Ending Our War Culture by Honoring Peacemakers.” He earned his Ph.D. in psychology from the University of Michigan in 1974. He is a Distinguished Professor Emeritus at the University of South Florida (USF) in the Departments of Internal Medicine, Global Health, and Mental Health Law and Policy. He is currently Chair of the US Peace Memorial Foundation and Editor of the US Peace Registry. His academic work has included over 125 scholarly publications and he has been responsible for well over $50 million in research grants to USF. In 2007, he was awarded the Marsella Prize for the Psychology of Peace and Social Justice at the Annual Meeting of the American Psychological Association, recognizing him “for more than 4 decades of outstanding contributions to peace and humanitarian assistance.” His biography is included in the latest editions of Who’s Who in the World and Who’s Who in America.

In 2005, Dr. Knox founded the US Peace Memorial Foundation (a tax-exempt 501(c)(3) public charity) www.USPeaceMemorial.org. The Foundation directs a nationwide effort to honor Americans who stand for peace by publishing the US Peace Registry, awarding an annual Peace Prize, and planning for the US Peace Memorial as a national monument in Washington, DC. Knox believes that “these educational projects help move the United States toward a culture of peace, as we recognize the thoughtful and courageous Americans and U.S. organizations that have taken a public stand against one or more U.S. war or who have devoted their time, energy, and other resources to finding peaceful solutions to international conflicts. We celebrate these role models to inspire other Americans to speak out against war and to work for peace.” 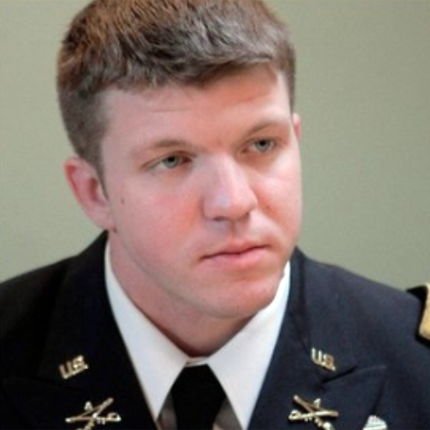 Major Danny Sjursen is a U.S. Army strategist and former history instructor at West Point. A native of Staten Island, NY, he graduated West Point and led reconnaissance units in both Iraq and Afghanistan. He earned his MA in History from the University of Kansas and pursuing a PhD in History on the subject of Civil Rights in New York City. His recent book, a memoir and critical analysis of the Iraq War is titled: GHOSTRIDERS OF BAGHDAD: SOLDIERS, CIVILIANS, AND THE MYTH OF THE SURGE (University Press of New England, 2015). His work appears on TomDispatch, War on the Rocks, The Nation, WhoWhatWhy, and the Kansas City Star.